Skip to content
Welcome to Adoring Jessica Chastain, your online resource dedicated to the talented American actress JESSICA CHASTAIN, a two-time Oscar nominee. Maybe you can know her from the roles that led her to be an Oscar nominee, The Help and Zero Dark Thirty, or from more recent movies like Molly’s Game, X-Men: Dark Phoenix, IT Chapter Two, Ava, among other incredible films. Please, visit the About Jessica section if you are new to her world and want to learn more about her career. The aim of this fansite is to bring you the latest news, photos, videos, and everything related to Jessica. And if you like everything you see here, please make sure to bookmark the site and come back soon for more updates.
Instagram / Twitter

The actress opens up about her upcoming film, The Eyes of Tammy Faye, and television series, Scenes from a Marriage 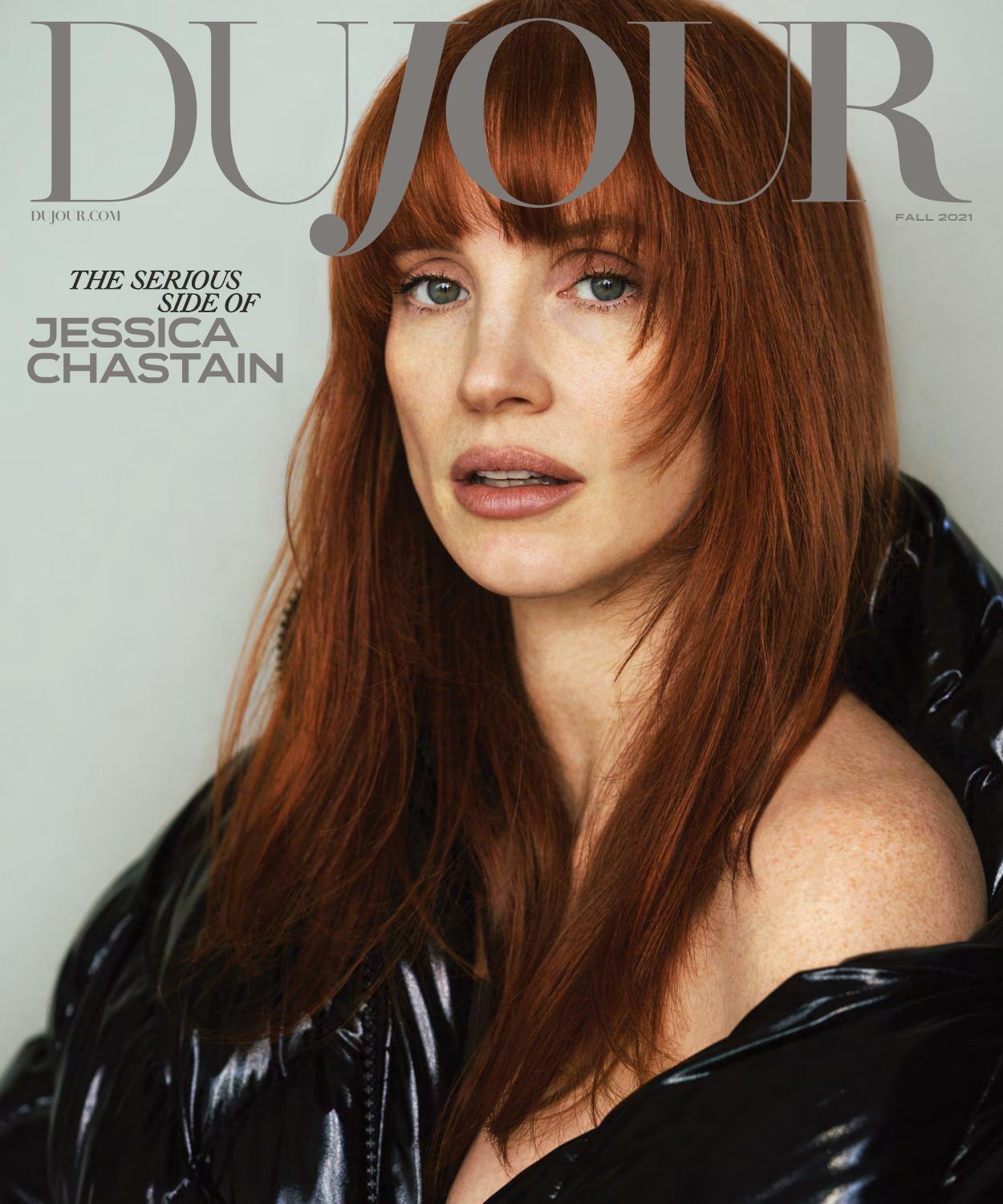 In 2012, not long after Jessica Chastain wrapped Zero Dark Thirty, a ripped-from-the-headlines thriller about the search for Osama Bin Laden that garnered the 44-year-old actress her second Academy Award nomination, she took a serious look at the Hollywood around her.

“I immediately saw there weren’t a lot of options for women, at least in terms of great characters that are different. Actresses were regulated to a single type,” says Chastain, talking via Zoom while on vacation with friends and family in Italy. Studying acting and repertory theater at Juilliard in New York had given her a wide breadth of choice roles, but, suddenly, she opened her eyes to see that the film world might be “a tad limiting in terms of what people were offering.”

It was around that time that Chastain stumbled on the 2000 documentary The Eyes of Tammy Faye. Narrated by RuPaul, it’s about the life of the late Tammy Faye Messner, a Christian TV personality, singer and evangelist often parodied for her marriage to Jim Bakker (who was later imprisoned for fraud and conspiracy), not to mention her over-the-top style, which included heavy makeup and a perpetual tan. Messner died in 2007 of colon cancer.

“I knew about Tammy from what I’d seen on Saturday Night Live, but I actually had never seen her give an interview until I watched the documentary,” Chastain says. “My impression from sketch television was that she cried all the time, she was a crook and always had mascara running down her face.”

But Chastain found herself particularly moved by the film and Messner’s message that “everyone is deserving of love,” she explains. So she called her agent and manager and bought the narrative feature film rights to the documentary herself.

Go ahead. Call it one of Chastain’s “crazy ideas,” she says. “But I have these ideas that we have to push against an old-fashioned way the film industry has worked.”

Another “crazy idea” Chastain had was a female-driven espionage thriller, a subject she’d learned about while working on Zero Dark Thirty. “Where’s the female version that isn’t a comedy?” Chastain asked herself. She assembled a team of actresses (including Lupita Nyong’o and Penelope Cruz), found a screenwriter (playwright Theresa Rebeck, whose Spike Heels Chastain had done scenes from at Juilliard) and The 355 will be released in early 2022.

“I was stoked,” Chastain says. “The actresses own the movie. How incredible.”

The truth, the flame-haired Chastain explains, is that “creating [film and television] is a lot of work. There are so many headaches on the producing side. It’s so much easier when someone sends you a script. But I’ve never been the person who says to go with the status quo. I’d studied the industry for a long time. If I’ve been given this golden ticket, I understand how lucky I am to do what I do. For me not to use my platform to do something positive for others just feels irresponsible.”

Flash-forward nine years to this September, and the fruits of Chastain’s labor of love, a narrative film also called The Eyes of Tammy Faye, will hit movie theaters. If Chastain’s career has encompassed a series of chameleon-like performances in X-Men: Dark Phoenix, The Help, Molly’s Game, The Martian and Interstellar, among others, The Eyes of Tammy Faye provides a full-on transformation. Adds Chastain, “I look so different in every movie.”

“She disappeared completely into this character,” says Michael Showalter (The Big Sick), the film’s director.

“This is a character that Jess has lived with for so long and a true passion project for her to honor this real person,” says Andrew Garfield, who co-stars as Jim Bakker. “We would also go to church together on our Sundays off, trying to commune with God and Jim and Tammy and do them justice.”

“People might really make fun of me. But Tammy Faye probably thought that every day, and she did it anyway.” – Jessica Chastain

There were days when it would take Chastain seven and a half hours to get into makeup as Tammy Faye, especially for a final musical number that will no doubt have award season prognosticators buzzing. “I just wanted to cry,” Chastain says. “People don’t understand that [that kind of makeup] takes a lot of energy, but I used that time to listen to her voice. I just rewatched and rewatched her on video. I’ve seen every video she’s ever done.”

For the first time, Chastain must also sing multiple times on-screen. She’d done it before, a little bit in Crimson Peak and in Tree of Life, “but I’ve never sung like Tammy Faye. To be honest, I was supposed to pre-record [a few tracks] and I was so scared,” Chastain says. “I drank whiskey and Throat Coat [tea]. With Tammy Faye, it always sounds like she’s hollering to heaven.”

In fact, recalls Chastain, “there were so many parts of making this movie that terrified me. On the first day of shooting, I started shaking before the first take. That’s never happened to me on a movie, and it was so embarrassing. But I thought, If I’m going to throw myself off this cliff, I’m going to jump off the deep end. People might really make fun of me. But Tammy Faye probably thought that every day, and she did it anyway.”

Chastain’s ability to feel the fear and do it anyway certainly wouldn’t surprise Anne Hathaway, who became close friends with Chastain when they filmed Interstellar. Hathaway calls Chastain “this irresistible mix of traits,” two of which are “fearless and discerning. She’s a gifted and tuned-in listener in life and on-screen. Jess is one of the most generous and sensitive—but tough as nails—people that I know.”

Also this fall, Chastain appears in far less makeup and in more natural light in HBO’s new Scenes From a Marriage, based on Ingmar Bergman’s 1973 Swedish miniseries. Chastain plays opposite Oscar Isaac, her old Juilliard pal of 20 years, who texted her last-minute to jump in as the show was going into production during the COVID-19 pandemic.

“She’s one of the greats,” says Isaac. “She’s someone that has always inspired me and brought the best out of me, both as an actor and a person. Acting with her is effortless. Nothing needs to be planned in advance. As long as I’m present, I know anything can happen because there is total trust.”

“I’m not very good at toeing the line and keeping the status quo. I’ve never been good at that.” – Jessica Chastain

Adds Chastain, “Because Oscar and I are so comfortable, we didn’t have to be polite. In some sense, we could read each other’s minds.”

Says Scenes From a Marriage creator Hagai Levi, known for his work on the original Israeli In Treatment, “Their old-time chemistry made their married dynamic appear very real and close on-screen.”

Of course, Chastain has her own dashing husband at home, fashion executive Gian Luca Passi de Preposulo. She promises that though both Scenes From a Marriage and The Eyes of Tammy Faye show relationships crumbling (as does Ibsen’s A Doll’s House, which Chastain hopes to do on the West End soon, after a production was cancelled because of the pandemic), her husband is “great.”

Usually, because there are so many people working on set, you have a lot of visitors and “there are just people everywhere,” Chastain says. But because of protocols, Preposulo wasn’t allowed to visit Chastain on Scenes From a Marriage. “There was never a break. I wanted to be reminded of my great husband, but it was so intense and so intimate. Takes were 25 minutes long. We were just fully invested in our characters.”

Which is, of course, the whole reason Chastain got into acting in the beginning. And if she can push Hollywood along in the process, all the better. Making Tammy Faye, she explains, was “the most difficult thing I’ve ever done and the scariest thing I’ve ever done. But I did it because it needed to be told. I’m not very good at toeing the line and keeping the status quo. I’ve never been good at that.”